skip to main | skip to sidebar

My Blog continues on my new web site at http://carolhunt.co.uk/blog/
Posted by Carol Hunt at 02:04 No comments:

Talking about the Chronicles 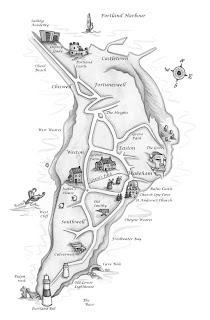 I an working on a talk for Portland Rotary Club entitled Writing the Portland Chronicles, children’s stories set on Portland inspired by local myths, legends and history. So far I have found various maps and old dragon jokes. I think in some ways it will be more challenging than talking to children - at least you can guarantee that kids will ask lots of very searching questions (How much do you earn? etc). In fact, there are so many aspects of my books that are drawn from the local landscape and folklore that it is difficult to know where to begin.
Posted by Carol Hunt at 10:00 2 comments: 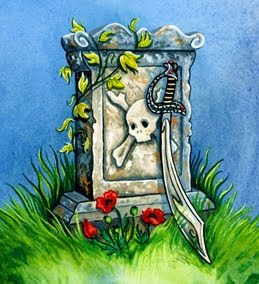 Here is a preview of the cover artwork by Domini Deane for Portland Pirates. Inspired by the 'pirate graves' at Church Ope. Domini works in watercolour and it takes a few weeks to complete the cover. She is great at capturing the spirit of a place and character in her painting.
Posted by Carol Hunt at 13:00 2 comments:

The Autumn evenings are drawing in and my thoughts turn inevitably to ghosts. Several places on Portland lend themselves to ghost stories. The Verne at the highest point of Portland deserves a legion of Roman soldiers tramping down the steep incline. There should be a headless horseman lurking somewhere near the windmills. And a group of lost Edwardian ladies with umbrellas walking around Wakeham in the rain.

I'm not sure why I am fascinated by ghosts. Perhaps something to do with watching a lot of Scooby-Doo shows in the early 1970s.
Posted by Carol Hunt at 13:26 No comments: 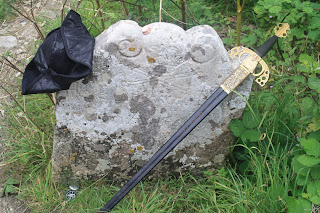 We went to see the Venus Verticordia by Dante Gabriel Rossetti at the Russell Cotes art gallery in Bournemouth today http://russell-cotes.bournemouth.gov.uk. Amazing colours. The twins liked the Victorian decor of the house and the cafe. We found ghosts in the churchyard at St Peter's Church, and saw the grave of Mary Shelley, author of Frankenstein. Nearby we also saw Domini's Frankenlion! (http://www.prideinbournemouth.com/lions.php) Now I am looking over the typeset manuscript of Portland Pirates, in its final stages, with a sword and pirates hat by Domini inset as chapter breaks. 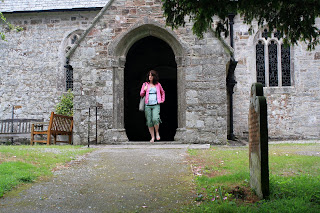 Last week I went to the parish of St Feock in Cornwall to look at a church built by my ancestor William Gerrish, a stonemason born in 1800. The church is set deep in the Cornish countryside, in an area where a lot of my forebears lived, including Penroses as well as the Gerrish family. The only recorded twins in my family tree (until Jade and Jasmine) were William's sons, so I feel a sense of connection to his family. The Saxon church tower set apart from the church building seems oddly familiar too.
Posted by Carol Hunt at 01:52 2 comments:

Made some drastic changes to the manuscript of Portland Pirates early yesterday morning and sent to Roving Press. I have changed the names of 3 main characters. The Pirates has quite a number of characters, including a pirate crew, Cap'n Red Pete, a cabin boy, not to mention a smuggler and the usual array of present day characters; Isabel, her naughty sister Suzie and Gregor the badly behaved dog from Groves Farm.

I am often asked if my characters are based on real people. Some characters are inspired more or less by people I have met, even briefly. Sometimes just a chance comment will also inspire a scene or help to rewrite an aspect of the plot. Not long ago I was talking to Wendy, who designs and creates peg dolls, and she described seeing an unusual cloud formation over Portland. The cloud was shaped like a dragon. Portland always seems to produce dragons. But it started me thinking about my time-travelling pirate ship and how the ship itself could appear in the clouds. It helped with a few plot difficulties, so thanks Wendy!
Posted by Carol Hunt at 01:07 1 comment:

Carol Hunt
I live in Easton on Portland with my 3 children.